Single women make up 56% of our membership base 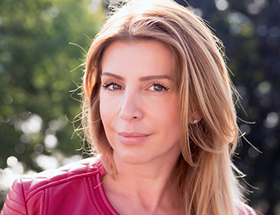 As one of the leading dating sites for mature singles in NZ, there’s no shortage of older women dating younger men on EliteSingles. Our users’ profiles are manually verified by our customer service team so that we can ensure our members are serious about using our premium service to look for long-lasting love. That means our site is an ideal tool for finding a serious romance with a younger partner safely and securely.

There’s been an enormous amount of media coverage centred on older women dating younger men over the last decade. We even looked into the legends with an EliteSingles study. However, what’s actually going on underneath the pop-style commentary and tabloid tales of seductive ‘cougars’ and their eager ‘cubs’? In search of clarity, we set out on a mission to look beyond the loaded monikers and dubious hype surrounding older woman/younger man relationships. Why is it still such a sensational topic and what are the perks (and pitfalls) of a partnership where age knows no bounds?

The rise of the ‘cougar’

It’s been eight years since Newsweek famously proclaimed 2009 as the year of the cougar. The now well-known term wasn’t a reference to the Chinese calendar; rather, it was a bordering-on-crass idiom coined to define 40-plus women with a predilection for younger gentlemen.

Although the US magazine reasoned that the cougar-craze was a fad destined for cultural oblivion, the article offered up an intriguing explanation for the newfound popularity of older woman/younger man relationships. According to the piece, the main driving force that brought cougars in from the wilderness was Hollywood. Indeed, shows like Sex in the City paint a more sophisticated picture of mature woman’s sexuality.

On the other hand, the aptly-named Cougar Town bolsters a smuttier stereotype. Commenting on the programme’s star – Courtney Cox – San Francisco journalist Jane Ganahl wrote that the producers did a great job of converting the former Friends star into “a hapless, sex-obsessed divorcee who seems to be a mash-up of Mrs. Robinson and Bridget Jones.”1

Off screen, the frenzy that surrounded Demi Moore’s marriage to Ashton Kutcher, not forgetting the widely reported liaisons of stars such as Madonna, Mariah Carey and Sandra Bullock, allegedly serve as further evidence.

Nevertheless, it somehow seems precarious to start explaining away the genuine rise in older women dating younger men by skimming off examples from LA’s amorous glitterati. What’s more, the way in which news outlets around the world, Newsweek included, represented the issue is perhaps more telling of the way older women are perceived by society.

First off, the very word ‘cougar’ is most certainly moot. Without getting too entangled in semantics, EliteSingles resident psychologist, Salama Marine, is quick to discuss this point. “Prejudices have a tendency to stick, even if society is changing,” she says, “calling an older woman a cougar isn’t meaningless, it’s a way of defining her as a predator who’s only interested in hunting down younger prey.”

For an enlightening comparison it’s worth looking at an equivalent expression for older men who hook up with younger women. Whilst still packed with hidden meaning, ‘sugar daddy’ isn’t nearly as derogatory as its big-cat counterpart. Instead it’s a jocular reaffirmation of man’s traditional role as father-figure and provider of material wealth (and woman’s role as recipient).

Around about the same time cougardom exploded into the mainstream, social scientists became increasingly immersed in researching age-dissimilar couples where the woman is the older party. Prompted by this shift in the demographics of modern relationships, a team of sociologists at the University of Maine set about investigating the reality of older women wedded to younger men2.

In their 2006 study, Sandra Caron, Mary Logue and Nichole Proulx interviewed eight married couples where the wife was between 10 to 17 years older than the husband. Their findings revealed that whilst both partners were content with their relationship, they still worried about how others judged them. Also, women expressed concern over the prospect of ageing and whether it would affect their partner’s attraction to them.

The trio behind the project were sure to report that “vast age differences, especially in woman-older relationships, clearly violate the norms of this society”. And this is by no means a revelation. 40 years ago, writer and activist Susan Sontag penned ‘The Double Standard of Ageing’ for the now defunct Saturday Review3.

In the native New Yorker’s opinion, older women are routinely subject to much stricter norms when it comes to picking sexual partners. “For most women, aging means a humiliating process of gradual sexual disqualification,” she scathingly wrote, “society is much more permissive about aging men.” Marine builds on Sontag’s earlier woes: “Many people are still shocked to see an older woman with a younger man,” she says, “they might think ‘what if that was my mother, or my son!’.”

Older women dating: more common than you might think?

Yet it’s not all cradle snatching and oedipal gloom for older women dating younger men. In fact, research carried out last summer by McGill University’s Milaine Alarie and Jason Carmichael concludes otherwise4. After pulling data from the National Survey of Family Growth, the Canadian initiative found that approximately 13 percent of sexually active women between 35 and 44 have slept with a man at least 5 years their junior. And, not only did they discover that middle aged women who’d been previously married were more likely to seek a younger mate, they also showed that older woman/younger man relationships are rarely brief flings (on average they last for 2 years).

Crucially, the Quebecois researchers disproved the ‘rich white’ cougar stereotype by demonstrating that many of these older women come from diverse ethnic backgrounds and also fall within lower income brackets. So, if women from all walks of life are ignoring the stigma and romancing with the more youthful cohort of the male population, it begs the question; what’s the appeal?

For younger men, it seems that the answer is simple: they find older women attractive. Indeed, in 2015, an EliteSingles study of 450,000 members revealed the ideal age-gap for modern romance, and the results were startling – while older men prefer younger women, younger men actually prefered to date someone older than themselves. Indeed, for men aged 20-29, the ideal women is older rather than younger; someone who can teach them the art of romance.5

Interestingly, according to the study, it’s not just younger men who like this dynamic: in fact, women’s tolerance for a younger partner increases with age. While women in their twenties want to either date someone older or the same age, women in their 50s and 60s are willing to open their hearts to someone younger – a synergy that may go some way towards explaining the older women dating younger men phenomenon.

Of course, there are other benefits to such an arrangement, and indeed, you don’t need to be too imaginative to picture what the benefits of an older woman/younger man relationship might be. If you’re struggling for ideas, there’s a slew of blogs and websites that testify to the plus sides for both women and men.

For Marine, one of the biggest draws has a lot to do with compatibility. “When an older woman looks for a younger partner, she’s probably quite comfortable with her sexuality,” she explains, “it’s likely that she’s already been married or had children. This means that she’s on the same wavelength as her younger companion, who’s probably not entertaining the thought of starting a family.”

Understandably, this can be a breath of fresh air: “It enables older women to regain a bit of youthfulness with their partner,” Marine adds. Energetic romping aside, a young admirer is a welcome alternative to the more vintage male, especially in the spontaneity department.

The chances are that a younger man hasn’t had the time to accumulate the emotional baggage that comes with growing old either. In conversation, Ganahl, who’s written extensively on older woman/younger man relationships, proposes an astute plus-side: “Younger men were raised by mothers during or after the women’s movement,” she says, “therefore, many tend to be far less sexist than their fathers, and not as preoccupied with money and status.”

A word of warning though: watch out for boastful boys who’re just out to get bragging rights over their mates. Meting out the negatives, Ganahl also urges caution. “Different expectations of relationships can lead to heartache,” she says, “especially if the woman is expecting a traditional commitment when the man aspires to be a player.”

Those guys who aren’t in it for the kudos will quickly find out that dating an older woman isn’t a one-sided affair in the slightest. That’s right, younger chaps also stand to benefit too. Under the tutelage of a more mature acquaintance, a young man can learn a lot about life and the meaning of things, both mentally and physically.

Above all, the time old adage ‘age is just a number’ couldn’t be more appropriate for older women dating younger men to bear in mind. And whilst such relationships are still bedevilled by Freudian taboos, older women shouldn’t feel dissuaded from starting something with a younger man, nor should younger men hold back from dating older women just because society dictates otherwise.

In the words of Coco Channel: “You can be gorgeous at thirty, charming at forty, and irresistible for the rest of your life.”

Of course, while older women dating younger men is a phenomenon which can bring much joy, if you’re looking for a real relationship, it’s important to choose a site that can offer you support and a quality service, not to mention one that can introduce you to interesting members! We’ve found three reasons why you should try older women dating with EliteSingles: